If you have not seen the new Kleenex commercial, grab your box of tissues, and have a look, here .

Are you back, all watery eyed? I am too.

Why so touching? Because, tissues aside, we're hard-wired, we humans, for community, for relationship, for love. And in the end there is nothing that heals the hurts of life or helps us to truly feel our celebrations as effectively as being in a relationship in which we feel heard.

All that guy did was invite people to sit on his couch, listen to them, and show, by his facial expressions, that he cared, that he sympathized, that he heard.

(of course, he probably sat their all day before the camera people felt they had enough perfect shots of grief and joy, relief, and celebration, not to mention the whosk of kleenex being pulled from boxes to make the the 62 second film, but that's movies.)

Real life is only a little broader. It takes a little longer, sometimes, there are real skills involved in helping people remember and share what they need to share, but in the end, we all recognized the expressions on those people's faces because they've been on our faces, and we've seen them around us.

So here's a thank you to all who listen, for a profession or in a family, all day long, or once to a stranger in the seat beside you.

And here's another thank you to all who care about churches, which are our society's major institution devoted to community, listening, and caring.


P.S. and don't forget about those blogging awards. You can vote here and look at results so far here
Posted by Christine Robinson at Wednesday, January 31, 2007 2 comments:

The UU Blog Awards Voting is going on here. Not only is it fun to vote for your favorites, it's a great way to be introduced to the best writing in a bunch of very different UU blogs, as all of the candidates have links. Both this Blog and Psalms for a New World, my improvizations on the book of Psalms, were nominated, so thanks so someone out there!

Have Fun!
Posted by Christine Robinson at Monday, January 29, 2007 No comments:

Email ThisBlogThis!Share to TwitterShare to FacebookShare to Pinterest
Labels: blogging 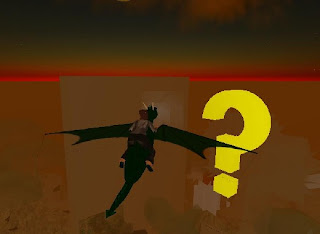 I've been researching rather than writing for the past three weeks, spending my spare iMinister moments in Second Life, a massive, multi-player virtual reality which includes, among many things, a UU Church. I've enjoyed this so thoroughly that I fear I will soon need de-tox and a 12-step program, and my research is not done, but here are some interim thoughts.

First of all, like most new pursuits, this one has a learning curve. I didn't start enjoying Second Life until I'd been struggling along for a couple of weeks. Now that I've learned to see, to move, to communicate, and to play in this life, things are better.

I have met not one but two people I know in RL in this venue; a person I grew up with and another who grew up in my current church. I've also made enough new virtual friends that I'm hoping that there will be a GA gathering for the 130 members of the UU Church of Second Life.

(I've also learned to create objects and use them, fly a dragon, translate dialogue into a variety of languages, exchange money, and I've had some interesting experiences in some of the educational exhibits which are set up for visitors. The best one was a simulation of schizophrenia, complete with visual and auditory hallucinations. )

At the moment I'm inclined to think that both answers are "yes."

About 130 people have joined this virtual church since its inception in August. Joining is pretty free at the moment, but about 30 show up for services each week, which would suggest (in Real life, at least) a core membership of about 60 people. Not bad for 6 months! (but a low ratio of the 3 million "residents" of SL) I've talked to a fair number of them, as well as folks who drop by during the rest of the weeks. By my count, about half are UU's in RL (real life). About half of the rest know about Unitarian Universalism but don't belong to a church. A quarter don't know anything about us and got to the church by accident or came to see a recreation of cave art which is also on the property. Many come because it is a peaceful place to sit...there is a waterfall or a campfire to watch and bird noises to listen to. I've given out a lot of information, in English and (haltingly, until I acquired a translator) in Spanish and French about Unitarian Universalism.

SL is not necessarily a "nice" environment. Many people come here to play with their shadow side, and spend a lot of money buying weapons, being aggressively sexual, or just foul-mouthed. The contrast of the church's values of authenticity, respect, and playful play is even more stark than in RL. And even where people are being nice, it's a kind of chaotic, frontier environment...exciting and exhausting. UU'ism comes off here as and organized, serious, peaceful, welcoming version of ourselves. It's a good thing.

The folks I've talked to really want to discuss their religious values, and they seem to really value the support they get in this on-line, visual chat. In the Joys and Concerns section of the worship service, one gets the impression that real prayer is going on. It is, as someone remarked to me after last week's (Thursday evening) service, strangely moving. There are a lot of possibilities here.
Posted by Christine Robinson at Saturday, January 27, 2007 3 comments:

Some of my blogging colleagues are making New Year's Lists of their favorite posts, not only for nostalgia's sake, but so that people can vote in the UU Blogger Awards. (if you want to participate, go here)

My favorite post on this blog is an early one, stemming from the first comment that was left on it, "Singed by God"

I think that my most valuable contribution to the UU world was with three posts on "Freedom of the Pulpit" and how that concept applies to the common ministerial request to have a right of first refusal on non-member weddings. That series starts here.

My biggest blogging suprise was discovering the interest people have taken in my improvisations around the book of Psalms,
which gets a dozen or so hits a day, mostly from people Googling for a modern version of a particular Psalm. My hit map for that blog is impressively international.

And for me, the greatest kick of Blogging was making new friends and hearing from old ones.

Happy New Year to you all!
Posted by Christine Robinson at Wednesday, January 17, 2007 2 comments: 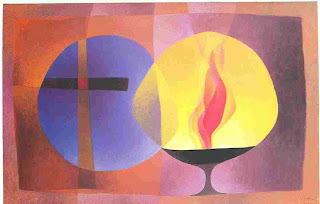 Someone from the Outlaws Bridge Universalist Church emailed me this morning. Outlaws Bridge is one of our few remaining "for real" Universalist churches. Isolated in rural North Carolina, they were able to keep their authentic Universalism through the post-decade "let's merge and all be Unitarians" era.

At any rate, in browsing the UUA's website, she came on this graphic, which is from our church, and prominently features the Universalist's Off Center Cross. She wanted permission (thanks for asking!) to use this art piece.

Of course I gave her permission..also offered to send her posters to sell as we have many. (available from Uni Uniques or at GA if you are so interested).

Here's more information about this piece of art.

It’s a pastel drawing, done in the mid 1980’s by then church member and Albuquerque artist Bob Hooton. It’s his take on the central figure of our mural, the two circles of Unitarianism and Universalism coming together. The mural was created right after the merger of the Unitarians and Universalists, and this figure, in one form or another, has been our church’s unofficial logo ever since.

The Universalist’s off-center cross and the Unitarian’s chalice, both in circles symbolizing completeness, come together. Bob Hooton’s piece is a little different from the mural piece; his cross is larger, and he emphasizes the chalice’s flame, rather than the chalice as a whole. Also, the intersection of the two circles was very important to him; he made it distinctively leaf shaped and the colors blend (in the original…this has faded in the above) to make the center green. To him that added the element of nature to the human created symbols of cross, chalice, and circle.
Hooton called his work, “Freedom to Believe.” His gift was very important to the congregation in the 1980’s.
Posted by Christine Robinson at Saturday, January 06, 2007 No comments: