More Blogging on the ARIS Survey

Tom Shade, at the Lively Tradition, has his own interesting interpretation of these same survey results here
Posted by Christine Robinson at Friday, July 27, 2012 No comments:

I don’t know if the ARIS Survey puts exactly the same boundaries on US Regions as the UUA does, but regional findings from this survey  are pretty interesting. 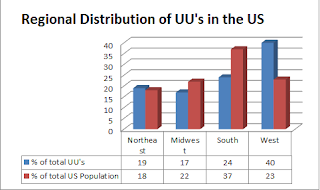 We have a lot of history and heritage in New England.  And there is a lot of current life and vitality in New England.  I went to Seminary there and was fascinated for three solid years. But I was glad to leave because even 35 years ago, New England UU'ism seemed dull, dug in,  and old fashioned to me.  My ministries have been in the South and the West.    And I don't think I am alone among southerners or westerners in chafing at the New England Mindset that so often rules our denomination.  At this time of year, it is particularly irksome, as the privileged  UU calendar which involves churches and ministers taking the summers off because churches are not air conditioned and "everybody" is at the beach or in Maine until Labor Day, after which school and Church start up for the year.  Those of us who manage year-round, full service programs in modern buildings and start our program year Mid-August with the rest of the West and South, especially notice that we're outsiders in the UUA at this time of year.   But really, we're not outsiders!   Further, we westerners are doing quite well, capturing the hearts, if not the membership, of a significantly larger percentage of the population than other regions.  Not all of that is our own doing, of course; the south in particularly is known as a haven for conservative religions and the Northeast is nearly European in its disdain for religion of any kind.  Still, something is going well in the west that we should take note of!

In my last two posts, I have discussed research findings about Unitarian Universalists from the American Religious Identification Survey.   Now…what does it all mean?

More than half of those who tell researchers that they are UU’s don’t belong to a UU church.  Some are probably peripherally involved with a UU church,  but it seems more likely that the majority of this group consists of people who were raised UU.  (This can be inferred from the large number of people who identified as UU’s who said that they had never changed faiths, ie, were raised UU’s.  Over 50% reported of the sample claimed this, whereas I have never been in a group of UU’s over age 35 where more than about 20% were raised UU’s; the usual figure is 10%.)   So it appears to me that a major question we should be asking is,  “What could we do to get our kids back?”  (most of those “kids” are now over 40, of course).  The answer to that question will have to be found by discovering ways we can serve the religious needs of adults who were raised UU’s, still think of themselves as UU’s,  but are no longer participating in a congregation.

A second, more general question would be,  “How can we serve the religious needs of those who tell researchers that they are UU’s but are not members of our congregations?  (In some polling situations, three times as many people tell researchers that they are UU’s than are members of our congregations)    What’s up, here?  Are there solvable issues with current congregations that would bring more folks in?  (maybe most of our congregations need to find ways to offer Saturday worship? Maybe what people really want is small groups?)  Is the problem that we’ve conflated legal membership in the corporation with membership in the religious community? (We need to ask the Puritans how that worked for them!)   Are there ways to meet needs on a fee-for-service basis that would allow non-member UU’s to feel a part of things and offer support without joining? (Retreats, RE, Small Groups, etc?)  Do we want to do that?    This discernment is the work that is being called “Congregations and Beyond”.

More from the Religious ID Survey


The American Religious Identification Survey is done about once a decade and involves a large number of Americans (about 50 thousand) in a telephone poll about their religion.  The third such poll, done in 2008, was just released, and has a number of interesting points for UU’s to ponder.   The information can be found here:

Besides the points I covered yesterday (That fewer than half of those who identify as UU’s actually belong to a congregation, that that group is growing in number rather significantly and growing in diversity even faster than the American population is), here are some more points of interest in this survey.

2.     We’re aging faster than the population at large.  The median age of the population has increased from 40 to 44 years old over the study period, but increased from 44 to 52 years among those claiming to be Unitarian Universalists. (remember, half of these people don't belong to congregations.  However, most of our congregations appear to have aged in this time period.)

A small  percentage of respondents were asked  more detailed questions of their religious beliefs. The following data is suggestive but based on very small numbers of respondants, so is not statistically significant.

In the last post of these series, I’ll comment more on the significance of these statistics.
Posted by Christine Robinson at Monday, July 23, 2012 2 comments:


In 1990, 2001, and  2008, researchers funded by the Lily Foundation randomly dialed  up about fifty thousand  Americans and asked them,  “What is your religion, if any?  Then, they asked follow-up questions.  In 2008, 192 of those fifty thousand identified as Unitarian Universalists, up from 182 in 2001.  The following is an extrapolation and analysis of this data.  The whole report can be found  here  This study gives us some interesting information about ourselves and comparison to other religious bodies.

The single most interesting, but not surprising fact is that this study suggests that there are more than a half a million adult UU’s in this nation.  Fewer than half of these self-identified UU’s are legal members of UU churches, but they think of themselves as UU’s.  Furthermore, this group is growing robustly…as a matter of fact,  nearly keeping up with population growth.  (the group of self-identified UU’s grew by 26% between 1990 and 2008, compared with 30% population growth)

Here’s a happy surprise:  The UUA has done a little better than the nation as a whole in increasing ethnic diversity.   In 1990, non-Hispanic Whites were 90% of the  UUA. (compared to 77% in the US as a whole)  These days, non-Hispanic whites are 75% of the UUA. (compared to 66% overall)    We are still lagging behind our nation, but not by as much.   Our success at this is largely due to an increase in Hispanic UU’s, however, while most of our diversity "angst" over the years has been the small number of African American UU's.

11% of the US population is Black,  but only 6% of this sample of people who claim to be Unitarian Universalists is Black.  However, even on this point we have notable success.  In 1990, we lagged 8 points behind the nation in percentage of Black members.  These days, we lag only 5 percentage points behind.

This study has more interesting things to say about us.  Stay tuned to this Blog for more!
Posted by Christine Robinson at Friday, July 20, 2012 3 comments: