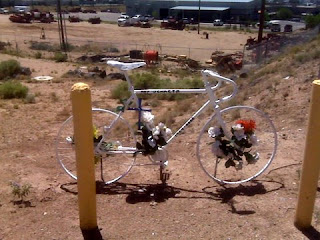 Two Ghost Bicycles have appeared in my life, both on the same street, my major commuting street, about five miles apart.   Ghost bicycles commemorate bicyclists killed or severely injured, usually by cars.  They are stripped down bikes, painted white, labeled with the name of the bicyclist, and since this is New Mexico with our major Hispanic influence, decorated with flowers like the roadside crosses which commemorate motorist deaths in our state.

The project started in St. Louis, just 7 years ago, when a homeowner saw a car strike and kill a bicyclist in front of his house.  Horrified, he painted an old bike white,  added a sign,  "A cyclist was killed here", and locked it to a signpost.  He noted the effect this had on motorists and got together with a few others to post 15 more bikes where cyclists had died in the metro area.  From this humble start, Ghost Bikes have appeared around the world.   There have been some controversies, of course, about where the bikes can be, but most cities are eager to be bike friendly, and it's good for everyone to remember that the worst can happen in a moment of carelessness.  This particular bike was moved so far off the road that I hadn't seen it from my car in months; I met it when I took the bike path.

Cyclists have to be reminded to ride safely and sanely, of course, but the vast majority of the bike fatalities in this nation are the fault of the driver of the cars.

So...be careful out there!
Posted by Christine Robinson at Saturday, August 07, 2010 No comments: