3 of 4 UU's Don't Belong to Congregations. Why?

Why would that be?  Let me count a few ways.


1.  Some of them don't have a UU church in commuting distance.  Above is an old map,  but it shows huge swaths of our nation (anything not pink or purple) where there is no UU church in the county. Not much has changed in 12 years.  Some people who are out of range of a brick and mortar church belong to the Church of the Larger Fellowship, and more may now that this organization has really beefed up its on-line resources, but most apparently don't.

2.  Some live in range of a UU church but don't belong because they can't find a place for themselves theologically, or they don't like the minister or the leadership group,  or they have become discouraged by church politics or burned out by the incessant demands of lay leadership.   We are a denomination of small congregations...and small congregations are hard, hard work.  There are very few communities outside of the East Coast between Washington DC and Southern Maine which offer any real choice of UU congregations.

3.  They may live in range of a UU church but be busy with other things in their life right now.  Many college students are near UU groups but don't join up, for instance.  Their lives are rich and interesting and busy on campus.  It would take a huge effort of outreach and support to get them interested in belonging to a UU church.  (I get this.  My son belongs to this group)

4.  They may have grown up as UU's and not continued to belong to a UU church, although, if asked, they would say they were UU's because they generally agree with what they were taught as children.  That is to say, they may be among the between 80 and 90% of children of our church schools who don't join UU churches ever again in their lives.  If the goal of our RE programs of the past 50 years had been to innoculate children against church, we'd consider ourselves quite successful.  Ouch.  My two siblings belong to this group.

6. Then there are the ones who don't want to be asked for money but don't mind taking advantage of the fact that some people will give for them.  But this is, in the end, a pretty small category.

Put all these folks together, and it is easy for me to believe that 3 out of 4 people who think of themselves as UU's would not actually belong to a congregation.

How about you?  Can you add other reasons UU's  might not belong to a UU church?

Peter Morales' paper,  Congregations and Beyond  (found here)  raises some interesting issues for UU's and other religious people, especially those in small denominations and those which practice congregational polity.  (polity is church governance.  Congregational Polity is the form of government that makes congregations the basic unit of the denomination.  So, for instance, technically, you are only a UU if you belong to a congregation which belongs to the UUA.  You can't be an individual member of Unitarian Universalism.)

The basic problem is that the institutional category,  "congregation", once virtually a pillar of American society, has become less and less interesting to younger generations.  (Congregation is still a pillar of society in a few places, notably the South, or in Utah.  You can tell this is the case when the first question asked of a newcomer to town is,  "What church do you belong to?"  Some newcomers to town take this as a rather agressive evangelizing effort but it probably isn't.  It is probably just a social locator.  "Oh...he's an Episcopalian.  Got it.")

There's no doubt about the declining fortunes of "congregation".   To recap, here's a paragraph from my part of last year's Minns Lectures. (find it here)


Just to give you a sense of how the market share of all religion has changed over 50 years, let me go over some statistics.

Researchers  have been asking 20 year olds about their religion for several generations, so we know that 3% of young people of the WWII generation said they had no religion, and about 6% of the next generation…my parent’s generation…persons now in their 70s and 80’s.   About 12%  of the Boomers in the 1960’s and 70’s claimed “no religion”  20% of gen X’ers who were 20 years old in the 80’s and 90’s and a whopping 26% of the Millennial Generation now claim “no religion”.  From 3% to 26%...and rising.

When you notice these overall statistics, you have to remark that the ability of Unitarian Universalism to hold its own over the past generation is a show of strength, not weakness.  And, indeed, most denominations have done much worse than we have.

Peter is asking what we should do.  It's something we should all be thinking about.

Email ThisBlogThis!Share to TwitterShare to FacebookShare to Pinterest
Labels: congregations and beyond

*This is one of several responses to UUA president Peter Morales' white paper on congregations, which can be found here: 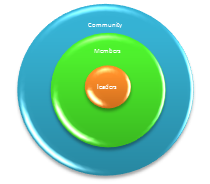 There's a theory of congregations that says that each congregation has three kinds of constituents.  They are called by different names but the picture is the same.  At the center of the life of the church are its most committed members, formal and informal leaders, contributors, workers...the people you see more than once a week and who give and get.  This group could be called "leaders", or "core members" or "most committed", or any number of other phrases.

The middle group are the members, constituents, the  people who come some, participate some, and give some, who identify with a congregation but don't put it at the center of their lives.   There's another group that is further removed from the center of the congregation, sometimes called the community, (as in, the community we serve), but perhaps better called the audience.

The audience includes the people who come to services but don't join or contribute, sometimes just on Christmas Eve, or when they are between relationships, or when their mother comes to town.  They are the people who use the church parking lot as a staging ground for group hikes, who rely on the food pantry,  whose children go to the child care center which only pays it's direct expenses in rent, but not the cost of the capital investment in the physical plant.  The audience includes the people who read the op-ed's which the minister produces, whose organizations meet for free in the meeting rooms, and those who are considering membership and getting involved.

The audience is hard to count and easy for the leaders to resent.  After all, these are the people who use the infrastructure, physical and emotional, which the church leaders have worked to provide, but they don't usually want to be counted...in part because their experience with the entity "congregation" is that it will try to suck them in, make them feel guilty, and ask them for money.  So they make themselves scarce when counting time comes.

On the other hand, they do a lot of wonderful things for a congregation.  How good does it feel to have a full house on Christmas eve, after all?  As the TV ad says,  "priceless".    We church folks do what we do to serve...and not just the folks who pledge.  Watching our resentment level is a good spiritual discipline.  It's a congregation and not a club, after all.  The audience is a given.   Plus, if we are good listeners, our audience keeps us fresh.  They are our outside audit, if we let them be.  And some of them will be enticed into the second or even the first circles because they come to notice that good things happen inside the circle.

Discovering a respectful  name for folks that I had thought of as "hanger-oners" or, on my bad day,  "free-loaders", was a wonderful day in my ministry.
Posted by Christine Robinson at Saturday, January 21, 2012 3 comments:

Some of us at First U Albuquerque have set ourselves to really figuring out what contemporary worship is all about.  Since the churches which feature this new religious art form tend to be big, evangelical churches whose mission is to meet people where they are and lead them to Jesus, they tend to have worship at times other than Sunday morning at 11.  That makes it a lot more convenient for people who serve on church staffs to visit and learn.  (and the first thing we might learn is that a LOT of people prefer to worship on Saturday afternoon.)

Last Fall, we visited the home base of a multi site congregation of about 8,000 people.  We noted

1. That the order of worship was dead simple.  Singing, Prayer, Sermon, prayer,  singing, and greet your neighbors.  No affirmation, no responsive reading.  No announcements (although the pastor sprinkled some announcements in at the beginning of the sermon).  No offering (there was an offering box at the end of some rows).  No story for everyone...it was all pretty much for adults.  There were plenty of kids in attendance and a full posse of teens, but there were kids classes at the same time.  The kids present seem to have been giving a goodie bag, but in no way was the sermon or the music "for" them.  They were a passive audience, helped to behave well, and those who didn't like it had another alternative.)

2. The congregation was predominately  what I would call "established" young adults in their 30's and 40's.   However there were plenty of baby boomers and more than a few elders, many of whom seemed to be a part of three generation families attending together.

3. The music was Christian Rock.   Sound levels were kept out of the painful range.  (in two churches we went to the poor drummer was seated in a clear plexiglass  box to keep the sound level down).  The most interesting thing to me about the music was that it was clearly conceived of, not as a message, but as a prayer.    A lot of it was a Christian Rock equivalent of "Spirit of Life, Come Unto Me".  Only....it was repeated enough that it became, not a reminder of what we believe, but an actual prayer.

4.  The messages were skillfully presented  but quite thin.  Not to mention covering things we didn't believe, like,  that 90% of the people of our good state are going to Hell.

5.  Did I mention that there were LOTS of people there, at this second of 5 worship services offered at that site that weekend?

6.  Some of those people are someday going to say to themselves,  "I just don't buy this!"...and walk.  If this has been their experience of worship, they are not going to find my church's eclectic but more formal music interesting, no matter how much freedom they are looking for.  Nor will it sound like "home" to them.

7.  Therefore...we are experimenting with contemporary worship.  So that we can be hospitable to the next generation of seekers, most of whom attend churches with bands, not organs.
Posted by Christine Robinson at Monday, January 16, 2012 2 comments: