After last night's news of 5 murders and a suicide in a classroom on a college campus, I searched the internet thinking, "hasn't this happened before?" I got lots of links to VA tech and to the Amish killings. It took a surprisingly long time to verify what I was looking for; This was the fifth school/gun incident IN A WEEK.

A week ago, a much more ordinary sort of tragedy: a female teacher shot and stabbed by her husband. She survived. He killed himself.

On the 11th, a 17 year old shot a classmate in Memphis Both survived.

On the 12, a kid in California was shot in the head by a classmate. The victim died a couple of days later.

Everywhere the traumatized witnesses, the blood-spattered floors, the sirens and helicopters and broken hearts.

But nowhere even a counting, much less an effective response. Nobody dare say the only thing worth saying...There are too many guns around, they are too easy to get a hold of, this epidemic of gun violence is a threat far beyond what any terrorist has accomplished and we need to DO SOMETHING ABOUT IT.

Just imagine the response if in five communities in our nation last week, "terrorists" had walked into schools and shot people in them. If past experience suggests anything, we'd be at war in three more places by the end of the week. Imagine what would have happened if five different people put poison dust in letters and sent them through the mail? Did you know that more people have died of gun violence than Aids in the last decade in this nation? Did you know that the world just shakes its head at America-the-gun-happy and enjoys a free society without feeling terrorized by guns? (Yes, gun violence happens almost everywhere...but it happens here way, way more often.)

When will they ever learn?
Posted by Christine Robinson at Friday, February 15, 2008 4 comments:

Kelsy in the comments, asks for my thoughts about the end of funding for the continental YRUU (Youth programs).

The thing that interests me about the ending of funding for YRUU is how it parallels the reduction of funding for Starr King and Meadville Seminaries, a move taken because we were spending all of our available "seminary money" on two seminaries which were preparing only 1/3 of candidates for our ministry. Even if you believe that these tow schools are preparing students well for ministry, it only seems fair to give the 2/3 of our future ministers who go to other schools some benefit of our collective "seminary money."

It has definitely seemed to me that something has been awry with YRUU and its focus on Cons as the be-all and end-all of Youth programs. In our neck of the woods, that's meant our teens were doing a lot of carbon-intensive travel, and kids like mine, who had weekend activities of their own, start feeling like second class citizens. (actually, I should speak for myself: their moms start feeling like their kids are being treated like second class citizens.) And all ministers do notice that our High School programs are only serving a fraction of the number of kids served by our Mid-High and elementary programs. If we were doing a good job, La Amikoj would be the largest class in the RE program.

So I'm up for seeing if we can find something better.
Posted by Christine Robinson at Tuesday, February 12, 2008 7 comments:

Thanks, somebody, for voting for this blog in the UU Blogger Awards going on right now. (Have a look, here.. Not only can you vote, but it's a fast way to get to the best of last year's UU Blogging.)

I know I've been a slacker blogger lately. But blogging is a lot like my my work, and my work in a church which seems to have burst through another size category has been pretty intense lately. We're planning for a third service, probably a contemporary-style service, and it does seem that all the "ways we do things" don't work very well at the moment. I tell myself there are worse problems, but re-thinking church from the ground up is a lot of work. Ergo, no blogging.

I am taking care of myself, however, enjoying weaving in my spare time. Check it out! 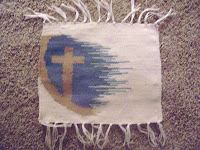 The End of America?

I've been reading The End of America by Naomi Wolf in preparation for next week's sermon on Democracy. While it has some good points about America's founders and their constitutional reasoning, a great list of how governments can subvert freedom, and some good history of how that has been done all over the world in the past hundred years, her object is to frighten Americans into thinking that their democracy has toppled, and in service of that goal, she is repeatedly misleading, evasive, and manipulative.

I've been trying to make myself read this book for about two weeks now, and was becoming more and more aware of either sloppy writing or writing that is misleading, evasive, and manipulative, so I started checking footnotes and the internet.

Here's the thing she does in this book.

She tells the beginning of a scary story about the subversion of rights in America these days. Then she moves on to talk about why this sort of thing is dangerous and how it has been done before by Nazis or other totalitarians. Then she moves on to the next scary story. But she doesn't finish her stories. It's implied that the scary things that were threatened in part I of her story resulted in harm to people, but she never quite says it. She supplies us with reassuring footnotes, and I'm sure that most people get her point and skip the fine print.


She tells a story, for instance, about a lecturer on Islam at U-Wisconsin at Madison, who "disputed the official facts of the 9/11 attacks and planned to spend 1-2 weeks of a 16 week course on Islam and Society on post-9/11 matters, raising the hackles of the Right. She talks about the University response, the right-wing media firestorm, and pressure from some legislators, and quotes the president as saying that he doesn't want his faculty exposed to political tests.

Then she drops his story, and speaks generally about how governments moving towards totalitarianism often target university professors, talks about extreme views in America currently against academic freedom, and talks about how in Germany and Italy before WW II, dissenting professors were targeted.

What she never gets around to saying is that the Madison lecturer, who had been hired to teach for one semester, was on leave for a year and has not been hired back, is not simply a teacher who doesn't toe the administration line. He believes that 9/11 was engineered by the US government and has been outspoken to the point of disruptive to make his point. And while the university was pressured to fire him, they didn't do so. It carefully reviewed his work for the previous 10 years as a teaching assistant, and his course outline, reminded him that his job is to teach Islamic culture, not his opinions about the American Government, and let him teach the course. That's a triumph of democracy, not its swan song.

I researched another similar claim before laying the book down. If I can't trust an author to tell me the whole truth, I don't read. Anybody know a better source of information about our post 9-11 constitutional situation?
Posted by Christine Robinson at Monday, February 04, 2008 3 comments: