(political) Life is a Riddle and A Mystery

I think that amongst the most interesting things that is happening in our world today is how people are having to stretch themselves in order to stay true to their values. I first noticed this amongst the Episcopalians. Some of the most socially conservative Episcopal churches in this country have disaffiliated themselves from the American Episcopal body because of women priests and gay priests, and put themselves under the discipline of socially conservative African bishops. This shows an open-minded willingness to accept something new that I hope they take some pride in. I'm sorry they are doing it for the reasons they are doing it but I think God works in mysterious ways and up until last week, I thought that this was one of the great Mysteries of our time.

That is until another group of social conservatives welcomed with open arms a woman candidate for Vice President of the US whose major credential is her feisty track record against good old boy corruption. (Also she's against abortion and for guns and has a son in the military. I wonder when is the last time an American president or vice president had a near relative in the military?)

But she is a woman, and not only that, she's the mother of an infant. An infant with special needs, at that. I've got a fair number of feminist credentials and I have to say that it makes me queasy to imagine how much that little boy is going to miss his mommy even if she becomes Vice President, much less, president. These are not exactly 40 hour a week jobs which easily combine with family and child care. Nor is he the only child in the family; there are three others still young enough to need a big slice of parental time and love, and it's not like they have a full-time dad. He's the owner of a small business. And whatever became of "I am my children's mother!"(and therefore only work, at most, part time while they are in school.) ?

No doubt they will work something out, and I think it is wonderfully open-minded of American Conservatives to let them do that in peace. And should Ms. Palin become VP, I look forward to seeing what the old boys make of their feisty leader.

But I am drowning in the Mystery of it all...
Posted by Christine Robinson at Sunday, August 31, 2008 1 comment:

I've been spending time in doctor's offices lately. Nothing major, just my annual stuff and my son's broken arm. What that means is that I've been hearing a lot of professional women referred to as "girls".

As in "please hand this to the girl at the window" (meaning the highly trained, apparently competent 50-something person entrusted with sensitive papers and distressed people) and "just sit there and one of the girls will call you back. "(Ditto)

At first I tried being confused. "I don't see any girls here." (blank stare...right over there, can't you see?) Then I tried being shocked. "Surely you don't hire children to work here." (puzzled cluelessness. "No, of course not". ) Then I tried the direct approach. "It's so demeaning to call the professionals you work with girls." This approach was to the male techs who were waiting around to put a cast on my son's arm. (Funny, nobody called them "boys". ) However the response was quite revealing. "Well, they act like girls!" one of them guffawed. His partner sensed dangerous territory and hastened to add. "Of course, they think we're nuts too!"

At the Mamogram office this morning, when told by the clerk to wait for the "girl" to call me back, I said again, "It's so demeaning to imply that the people who do such important work are children." The clerk was taken aback and finally responded. "I'm sure its a term of endearment." But I saw a shadow cross her face as she heard her own words. No doubt employee relations are just fine in that big office, but it was crystal clear that the person who was going to call me back was not "dear" to the one who had just called her a girl. It's not really a term of endearment, after all. No, actually, it's a term of belittlement. It bespeaks a lack of respect for persons doing important but adjunct work in a medical office because of their sex.


Call her a tech or a receptionist, a nurse or a patient rep. (hey, then I know more about what I can expect from her!) Call her a lady, a person...heck, call her a woman.


If you play bridge with "the boys" or go out with "the girls", that's your affair. But if you refer to the woman in your office who is older than I am as a "girl" you belittle her, and her work, and by extension, you belittle me.
Posted by Christine Robinson at Friday, August 29, 2008 6 comments: 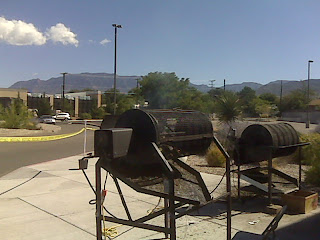 Its the weekend before Labor Day and I'm patiently standing in line to get my 30 pound bag of chili roasted at my neighborhood grocery store. You can roast chili at home, but it never comes out as well as it does from the great rotating barrels with their extra hot burners. The wait is going to be nearly two hours, and eventually I'll go back in to do the rest of my shopping, letting my neighbor read my magazine in exchange for keeping my place in line. For the moment I'm enjoying the beautiful day and the indescribably heavenly smell of roasting chili. New Mexicans go around sniffing the air in the Fall hoping for a whiff of roasting chili like we all hope for that increasingly elusive whiff of pine at Christmas.

They say that the chemicals that make pepper hot cause the body to produce endorphins, and that New Mexicans are so addicted to chili-high that they pine away without it. College-bound New Mexico teens are promised care packages, not of cookies but of chilis packed in dry ice.

Even the smell is addicting. Its the New Mexico high
Posted by Christine Robinson at Saturday, August 23, 2008 4 comments:

So it seems that a suspect in the 2001 Anthrax scare/murders had committed suicide. Now we may never know what exactly happened and why a respected researcher put anthrax powder in envelopes, killed two people and scared the nation half to death. (remember, no powder allowed in gym dressing rooms?) ..either because the man who did it will now never tell, or because the suicider will be presumed guilty and the case closed.

One thing I've not seen much about in today's news about this strange case is how the Anthrax scare was originally blamed, with supposed substantial evidence, on Iraq. It was another reason we had to go to war. One of the supposed weapons of mass destruction was germ warfare. The notes in the envelope were supposedly from Iraq and the powder itself had some especially Iraqi chemical makeup. That turned out to be flat out made up somewhere in the "information" chain. For a long time now (once we started the war), the FBI has focused on domestic sources of this little terrorist event that we've mostly forgotten. But that little terrorist event was a major cause of this disastrous war. And now the person they were about to finger is dead.