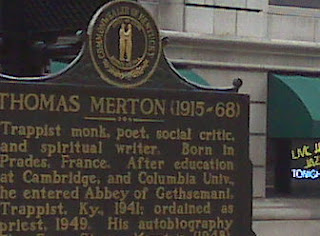 I've been in Louisville at the Large Church Conference, and snapped this picture of the Thomas Merton Memorial. Thomas Merton was one of the figures of my young adulthood, and I was thrilled to realize that the moment of his Enlightenment Experience was only a few blocks from our Hotel, and, furthermore, was commemorated by a plaque! It is not often that religious experience is so honored in our society. To complete my amazement, I was told that today is the 50th anniversary of his experience. Someone had read the story in the Louisville newspaper.

I got the picture posted via the miracle of mobile blogging and before I could add text, Rev. Cynthia Cane posted this comment, which I've moved up to the body of the text because her enthusiasm is so contageous!

I believe this (picture) is in downtown Louisville , which we Kentuckians call the 'ville. Thomas Merton wrote an astounding account of a personal about standing on the corner of 4th & Walnut:

“I was suddenly overwhelmed with the realization that I loved all those people,” he later wrote, “that they were mine and I theirs, that we could not be alien to one another even though we were total strangers. It is a glorious destiny to be a member of the human race. ... There is no way of telling people that they are all walking around shining like the sun.”

Wow! To-morrow is the 50th anniversary of this moment! And I can go to Louisville. Thanks!!!

Yes, at the Large Congregation Conference, Rev. Mark Ward told us about the Merton Memorial and read from some of Merton's writings at our closing worship service.

Merton is deeply meaningful to me partly because he had a profound effect on my father's spiritual growth.

My first question when looking at this picture was: "What's a Trappist monk?" I thought, wow, I'm really ignorant when it comes to religions with monks!

Then reading further, I surmised that it's a reference to where he was ordained? Does that kind of reference still stand?

Would anyone say, "Albuquerquen priest" for example?

I'd love more info about what's important about him...